The Pre-Summer Season Soldiers On With TERMINATOR SALVATION 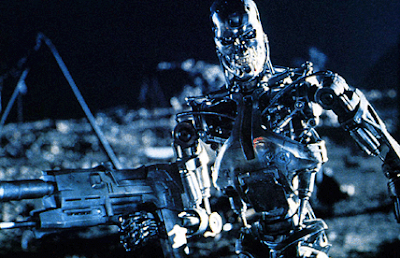 
You want to know how to begin what proposes to be an "event" motion picture? You first see the edges of ginormous letters that form the film's title shrouded in black or standing in space (or both). They are either shining metallic silver or beaming black like they are made out of the same alien substance as the monolith from 2001. They are so huge they at first can not be contained by the silver screen. They look as if as if they will collide but they glide into place as we pull back to see them in their entirety.

They, with the booming bass section on the score, announce that this is a big blaring blast of a movie that demands your attention up front. That's how you begin an "event" motion picture and that, like every other piece of the franchise blockbuster formula, TERMINATOR SALVATION makes good on.


As the fourth entry in THE TERMINATOR series, SALVATION doesn't intend to surprise or re-write any former history, it just intends to be a solid entertaining action film and on that level it succeeds enormously.

It opens in 2003 with an odd appearance by Helena Bonham Carter as a doctor representative for a large corporation trying to persuade a death row inmate (Sam Worthington) to donate his body to what, of course, is an ominous project. From there we jump forward 15 years (surprisingly that's the only time jumping we do - the rest is set in 2018) with Christian Bale as the intensely determined John Connor leading the resistance in the massive war against the machines across the definitively apocalyptic terrain. There's no reason to recount any more of the plot - it's a series of bombastic set pieces with tons of physical violence, devastating destruction, and ginormous explosion after explosion. Not that there's anything wrong with that. 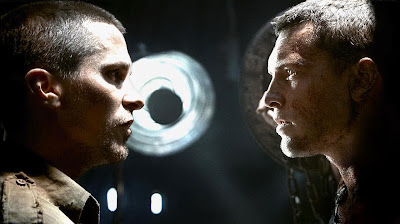 As one of the most capable actors working today, Bale is as ferocious in the iconic part (he's the fourth actor to take on John Connor) as he was in his infamous on-set rant. Worthington, possibly the real protagonist of the piece, is stoical and restrained with the right tone as he jumps from cyborg fight to cyborg fight. Many genuinely scary (or at least extremely jarring) moments abound with no wasted scenes or unfocused direction.

The former TERMINATOR movies are referenced in a non-offensive manner - Linda Hamilton's picture and voice on the tapes that Bale reviews for clues, the now set in cinematic stone "I'll be back" line, and (I warned you about Spoilers!) the face of Arnold Schwarzenegger via CGI on one of the Terminators in factory production.

Is this movie, which counts as both a sequel and a prequel (but then what franchise entry doesn't these days?), really necessary? Well, my first thought is no. James Cameron's first 2 TERMINATOR movies really had all these themes and the patented style of relentless action covered. TERMINATOR 3: RISE OF THE MACHINES seemed like just an excuse for one more go around before "Ah-nold" took command of California, and I don't even know how the TV series Terminator: The Sarah Connor Chronicles fits in to all of this. However, perhaps there is a need for a finely tuned franchise like this to keep going. As dark and desperate as it gets, we know the humans will survive against the machines and we like to see that over and over on the big screen with the best effects possible, booming sound, and folks of all ages gasping around us. Most likely I'll be back for that next time too.

I wouldn't call this film a success on any level whatsoever. An embarrassing script by the writers of 'Catwoman,' sloppy editing, a glaring lack of humanity, wooden performances from almost the entire cast, clueless direction, and lackluster action to say the least. Awful, awful, awful movie.

i love how they got creative with some of the robots, no so sure about the human performances tho

This idea is necessary just by the way