Revisiting RESERVOIR DOGS On The Big Screen - Thanks Again Cool Classics @ The Colony!

As a film geek/blogger it’s probably not surprising that one of my favorite pastimes is to see old movies, whether for the first time or hundredth, on the big screen. A 35 mm print, new or old, of a particular cult or could be cult movie really is most certainly my cup of tea. As I’ve blogged before, The Colony Theater in has been showing a regular round of what they call “Cool Classics.”


Last Saturday night was right for a midnight show of arguably Quentin Tarantino’s best flick. Since my girlfriend and I have attended such previous pop culture staples as ERASERHEAD, PURPLE RAIN and most recently enjoyed re-seeing CITY OF we were game to revisit: 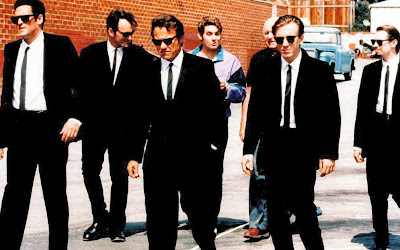 It was hugely fitting that the night before this late show, The Museum Of Art in screened THE TAKING OF PELHAM ONE TWO THREE. Why you ask? Because Mr. Too Cool For Film School Tarantino lovingly lifted the use of colors as code names from that classic 70’s heist film - i.e. Mr. Blond, Mr. Brown, Mr. Blue etc. Of course he snarkily threw in Mr. Pink just so Steve Buscemi could have something to hilariously complain about: “Yeah, Mr. Pink sounds like Mr. Pussy. Tell you what, let me be Mr. Purple.” He lifted lots more from other films here too but whether you consider it a rip-off or a homage, RESERVOIR DOGS, 17 years later, is still colossal cinema and one of the most daring breakthrough debuts of a director ever.

Most of the action in RESERVOIR DOGS (nobody really knows what the title means – Tarantino himself won’t say) deals with a never seen heist gone wrong and takes place in a mostly empty warehouse. It has been said that for budgetary reasons most directors first films are essentially ‘filmed plays’. That said, seeing this film on the big screen for the first 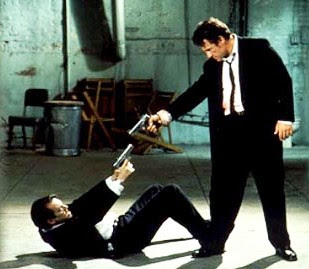 time enhanced the spare staging scenarios for me to an edgier level than I expected. The iconic shot, used on many posters and the go-to promotional picture, of Harvey Keitel with gun pointed at an on the floor Steve Buscemi is 10 times more effective here than on any TV viewing when it pulls back to reveal Mr. Blonde (Michael Madsen) coolly watching them in an over the shoulder viewpoint.

Likewise the shot from the P.O.V. of the cop (Kirk Baltz) tied up in Mr. Blonde’s car trunk – I mean it’s obvious to say but it’s so nice to see this film like this how it was truly meant to be seen.

One flaw of many film folks’ first films is that the actors all talk like the writer/director (see Richard Linklater’s SLACKER). This is actually something that works well in Tarantino’s favor here despite all odds. I can practically hear Tarantino coaching Buscemi, Keitel, producer turned actor Lawrence Ti 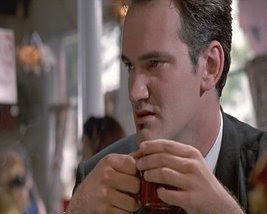 erney,Tim Roth et al. through all of their lines but somehow that’s actually a plus in these punchy proceedings. Tarantino wisely kills off his own character (Mr. Brown) after his opening “Like A Virgin” breakdown speech presumably because he was aware his acting wasn’t up to the caliber of his co-stars - too bad he didn’t make the same decision in future films (especially PULP FICTION and DEATH PROOF). 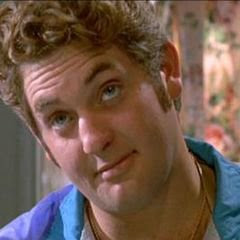 In the low budget framing but the high formula re-thinking that defines Tarantino’s cut and paste career, RESERVOIR DOGS deserves future wave after wave of big screen audiences. Even if you own a special edition DVD or Blu-ray, consider seeing it on the big screen if a print comes to your area. Every detail from Steven Wright’s voice-over on the radio (“K-Billy’s Super Sounds of the Seventies” to be exact) to the sadly late Chris Penn’s scene steals as Nice Guy Eddie just screams for larger projection.

One great moment – in a pivotal scene, Madsen spoke just as somebody in the audience made a distracting noise by dropping their drink. Keitel responded “excuse me?” as if he didn’t hear because of the offending interruption. Madsen had to repeat himself louder. Many at the Colony theater late show laughed – a communal sensation that can’t be recreated at home. Maybe that’s a disclaimer that should be on this film as well, especially the brutal cop’s ear slicing sequence: “These are trained professionals – don’t try this at home.” 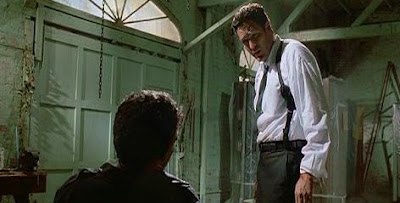 Post note: I realize after re-reading this that I was addressing folks who’ve already seen this movie. If you haven’t seen it – by all means, screw waiting for a big screen opportunity, just rent the damn thing and complete the indie initiation of your film education – why doncha?

"I don't tip because society says I have to. All right, if someone deserves a tip, if they really put forth an effort, I'll give them something a little something extra. But this tipping automatically, it's for the birds. As far as I'm concerned, they're just doing their job."

I'll have to watch this film again to see if it still holds up. I sometimes feel that Tarantino is nothing more than a glorified film student with a fetish for extreme violence, but his talent as a storyteller is certainly evident in all his works. I'm looking forward to seeing "Inglorious Basterds."

This post is great...actually your entire film blog is great. Love it!