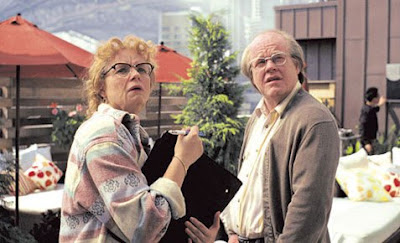 The noted screenwriter of such modern day masterpieces as BEING JOHN MALKOVICH, ADAPTATION, and ETERNAL SUNSHINE OF THE SPOTLESS MIND now is presenting us with an epic construction in which art imitates life and life imitates art in such a spellbinding manner that they become entangled so that one isn’t sure if it’s art or life’s parts flailing on the screen in front of them.

Attempting to describe the plot may be futile, but I’ll still have a go – Philip Seymour Hoffman plays Cayden Cotard, a playwright in a loveless marriage to an aspiring abstract painter Adele (Catherine Keener). Keener leaves with their daughter to conquer the German art community forcing Hoffman to deal head on with his loneliness and various sicknesses yet he is still inspired with the aid of a large grant to mount what he calls “a massive theater piece.”

Tormented but not creatively constipated, Hoffman assembles a cast and crew in a large warehouse in ’s theater district to set about building a vast replica of the city outside. Every actor is given notes on their individual scenarios because as Hoffman relates: “None of those people is an extra. They’re all the leads of their own stories. They have to be given their due.”

Dealing with the women in his life alongside his literally towering ambitions is just as tangled as he clumsily courts Samantha Morton as an eager assistant, Michelle Williams as a devoted thespian, a self-help book plugging therapist (Hope Davis), and Diane Wiest as an actress who oddly takes over Hoffman’s role of a director not long after he tells her she is weirdly close to what he visualized for the character. “Glad to be weirdly close” she responds. 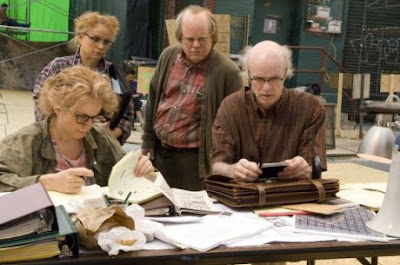 Tom Noonan, who can be seen in the background following Hoffman throughout the first half of the film, is hired though he has no acting or theater experience. His experience is in knowing everything there is to know about Hoffman including the address of his ex-wife and he even takes up with Morton. Morton has her own theatrical double in the form of Emily Watson who is neatly attired (and nearly indistinguishable) as a Morton clone.

Hoffman takes up with Watson, albeit briefly, but these relationship mechanics hardly define or dominate; they are restless and surprisingly realistic elements that wind in and out of this colossal collage. Though there are many funny moments, the tone is not intensely comical but there is the case of Morton’s house that is on fire and burns for years - echoing the successful surreal tangents of Kaufman’s earlier work.

As layered and multi-leveled as the mock city that Hoffman creates, SYNECDOCHE, is a mind bogglingly beautiful film. It isn’t concerned with notions of time (years pass with no convenient “six months later” or “a year later” titles), there are no pat emotional resolutions, and there is no big climatic reveal of the massive production to provide a soothing finish. What it does provide is ideas – themes on top of themes with implications and allusions to ponder over for years.

At many pivotal points Hoffman, struck by revelation, states “I know how to do the play now” and he and the film take us one step further into the blurring of oblivion. Kaufman has already blown moviegoers synapses with his fantastical tangents but this time he goes places many accomplished film makers would never even think of venturing.

It’s extremely exhilarating that he’s discovered on a grand scale that there’s no need for films to have designated integrated dream sequences; the films themselves are dreams. For his first effort as director to be as incredibly challenging as it is powerfully pleasurable will certainly kick off an extraordinary career of craft.

Philip Hoffman is once again quirky and brilliant!and Charlie Kaufmann has a signature obscurity to his films which I love. I just hope this movie gets more appreciation.

I Hyped Synecdoche on Everhype and gave it 92% which I think is fairly accurate.

I wouldn’t mind getting some opinions on it . If you get on there, rate me a 5 & request friendship.