D'oh! That Damn Bee Overtakes The Gangsta! That And A Couple Of Docs

"Movie? Who's talkin' about a movie? This is not a movie - this is my fuckin' LIFE!!!!" - Shelly Kaplow (Alec Baldwin) THE COOLER (Dir. Wayne Kramer, 2003) The news is: BEE MOVIE just hit #1 over not just AMERICAN GANGSTER but even beating out movies that opened last Friday (LIONS FOR LAMBS and FRED CLAUSE). Well that kinda deflates my post from about a week ago. I wanted to see LIONS, which Tom Cruise is already bitchin' about flopping, but just about every critic is telling me not to - though I probably still will. Looks like the real prestige (or Oscar wannabe) picture season has not yet begun. I thought I'd clean out my notebook and post a few documentary reviews - a couple of new release DVDs that deserve some words: CRAZY LOVE (Dirs. Dan Klores & Fisher Stevens, 2007) 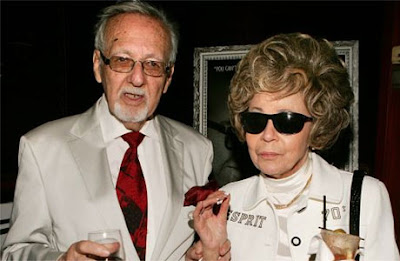 The saying "love is blind" has never been so chillingly played out than it is here. A tale torn from old New York Post headlines about prominent lawyer/mogul Bert Pugach's wooing gone wrong of young beauty Linda Riss is best described by veteran journalist Jimmy Breslin: "It was a big story...3 black guys throw acid in a white girl's face on behalf of her spurned boyfriend - a white lawyer in the Bronx ...sensational! The 3 blacks will go away forever, now we'll get the white lawyer - he'll go...and we'll sympathize with the woman forever." That sums up the first engrossing amusing half - the second half (which is just as engrossing) is where it gets weird. After 14 years in prison (the prison was Attica - where the titanically tumultuous 1971 riots occurred, mind you) Paguch is released and lo and behold, gets back together and actually marries the blinded bewigged Linda Riss! I can't say that this scandalous story, told in interviews with Pugach and Riss as well as a bunch of their old acquaintances - all in heavy make-up, is a "you've got to see to believe" spectacle because I've seen and still don't believe. Paguch is well spoken and has some charm but not enough charm to pull off this deal - most women would consider hired goons throwing lye in the face to be a deal breaker but what are you going to do? Woody Allen said something once about the heart being a resilient little muscle - I just never have seen it so blatantly displayed as something only about the size of the rock on Linda Riss's finger. MANUFACTURING DISSENT (Dirs. Rick Caine & Debbie Melnyk, 2007) 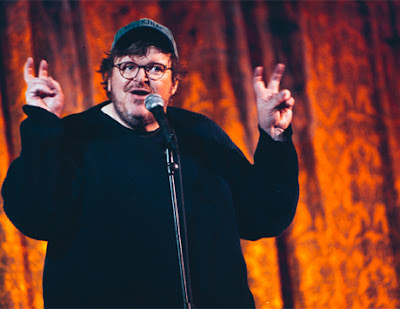 A documentary about a documentarian. There have been many works that have criticized Michael Moore * and his methods, in books like "Michael Moore Is A Big Fat Stupid White Man", counter-point documentaries like CELSIUS 41.11, MICHAEL MOORE HATES AMERICA, MICHAEL AND ME and FAHRENHYPE 9/11 as well as numerous anti-Moore websites like Moorewatch (which was featured in SiCKO) so what's another? Well, this sober overview of Moore's career and the premise of what really is accountable in docu-journalism presented here is far above the before-mentioned mostly manufactured by the right wing product. Many who haved worked with Moore are interviewed and many reputable talking heads (including Roger Ebert, Errol Morris, and Christopher Hitchens) make pretty damning statements while at the same time praising his ideals and his piercing place in pop culture. In the spirit of ROGER AND ME, Debbie Melnyk tries futilely and exhaustingly to get an interview with Moore - she actually corners him a few times in 2004 but he's elusive, preoccupied with getting Bush out of office, and at one point he smarmingly gets her to hug him for a photo-op, which in her narration she regrets and is obviously embarrassed by. The background on Moore being fired from his Mother Jones magazine editor gig, his famous fudging of the getting a gun at the bank in BOWLING FOR COLUMBINE timeframe, and his dissing of Ralph Nader are seriously things to ponder in this new light. A lot I can excuse and laugh off because I believe Moore is fighting the good fight - idealistically he's got the goods but one thing that's increasingly hard to get over is the account of the backstory of ROGER AND ME. I've known since a Premiere Magazine article in 1990 that he actually spoke to Roger Smith (there's a full transcript of the interview) prior to the film but that he allegedly tried to talk friends into denying it had happened so he could retain the "I could never get to him" premise really gets to me. But then this is just another biased documentary that should be taken like a grain of salt as well. If I believe everything it says - Moore is a backstabbing asshole and I don't believe that's true. He seems not to be a film journalist at all - more like a comedian who hi-jacked the documentary format in order to stage his routines. MANUFACTORING DISSENT has many valid statements and necessary views on Moore and his oeuvre - some are revelatory and provoking as Hell - but it's not nearly as funny or as entertainingly in your face as Michael Moore's movies are. Therin lies the rub. * As film babble readers know I've written quite a bit about Moore - like last summer's post The Evolution Of Michael Moore (June 26, 2007) and I went with my family to see him speak in person at the Carolina Theater in Durham - A Night With Michael Moore 4/3/2004 - so yeah, I admit I'm way biased. More later...
Copyright 2004-2018 Daniel Cook Johnson at 1:44 PM

To be honest, I agree with you 100% that Michael Moore is a comedian who uses the disguise of documentary film to give his thinly veiled political agendas a much stronger voice.

I guess a lot can be said about his artistic direction and choices as a film-maker too, however, his films are no-where near documentary.

I laughed my butt off watching "The Awful Truth" and agreed with most of his points. But his movies always irk me for the fact that he's using false advertising to sell his product. And that seems extremely anti-Moore and against his own principles, making him a huge hypocrite, in my opinion.

That said, real documentaries are films like "Operation Dreamland" and "Searching for Angelica Shelton." Nothing but hard facts hit at you straight -no opinion swinging, no bias news clips, no set ups, no staged locations... just life like it is. And as the audience, we are left to decide what our own truth is, and that's what documentaries should be.