The Darjeeling Prequel - Now Playing On My iPod Nano

"She's kind of like a movie everyone rushes to see, and no one understands it sittin' in their seats."
- The Replacements ("Achin' To Be" from Don't Tell A Soul, 1989) 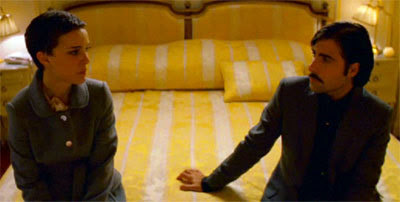 Since I just got an iPod Nano and am really new to the world of podcasts and video downloads I thought it would be a good tryout to download and watch this 13 min. short. I know - I could easily blow it up on my computer screen but having heard the criticism of this new gadget as a valid visual medium I decided to view and review HOTEL CHEVALIER based on my iPod experience. So here goes : 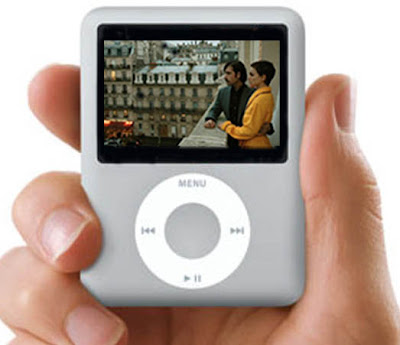 Immediately I realize how silly this venture is because it's presented in widescreen which makes the picture much smaller than the screen provides and there's no way to zoom or enlarge in any way. A mustached Jason Schwartzman lounges in a Parisian hotel room ordering grilled cheese sandwiches and watching STALAG 17 on TV (I could barely see it on the iPod screen - thanks for the nerdspotting The Playlist!) until Natalie Portman calls up and wants to visit. She shows up shorthaired (I guess it still hasn't grown back from V FOR VENDETTA) and clingy. They exchange cryptic dialogue - Portman : "are you running away from me?" Schwartzman : "I thought I already did" and have a brief sex scene that is really not done justice on my iPod's postage stamp viewpoint.

This short film seems to completely be about the song "Where Do You Go To (My Lovely)" by Peter Sarstedt - the bulk of which is played twice. The lack of back story and any further insight into either Schwartzman or Portman's characters left me hanging and unsatisfied. Even though on my little screen it looked great - the colors and framing all held my attention and I loved the song but sadly the stylistic approach is the whole show - no real insight or memorable moments appear. The last tracking shot of the couple in question walking in slow motion is a Anderson trademark and it's provided in this short as the payoff which uh...well, let's just say it doesn't bode well for THE DARLEELING LIMITED. Despite that the full length follow-up PART 2 already getting pretty scathing reviews so far I'm gonna wait and see for myself how disappointing it will be - snap! Nah, nah...we'll just wait and see.

Thank you for articleI liked it very much