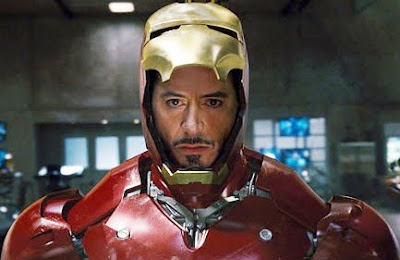 Summer sequel season has officially begun with the return of Robert Downey Jr. as Marvel Comics super hero Iron Man. But you not only know that, you've probably already seen it as it had the second-highest May opening of all time grossing $133 million over this last weekend.

For my two cents, I'll say upfront that IRON MAN 2 is a good time, not the great time that the original was because it's a bit messy. Highly stylized and funny with quite a few sheer thrills, but still a bit messy.

We catch up with Tony Stark, not long after revealing his identity as Iron Man, enjoying his reign as a global celebrity who claims to have "privatized world peace." He seemingly takes in stride that he's called before a Senate Committee for a hearing led by Garry Shandling as a disapproving Senator who wants Stark to turn over the Iron Man suit to the military.

Our snarky hero is more concerned that the palladium in the arc reactor keeping his heart beating has begun to poison his body so he's trying to live it up since his days are numbered. 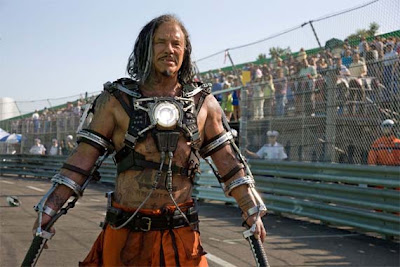 Meanwhile villainy toils in the shadows in the form of Mickey Rourke as a crusty Russian who has built his own arc reactor and a suit that has its arms outfitted with cybernetically controlled whips.

Whiplash, as he's dubbed, blames Stark Industries for his father's death, and seeks revenge. He attacks Stark on a racetrack in Monaco, but Stark defeats him after some close calls when he's able to get to his snazzy Iron Man suitcase.

Also meanwhile, and that's one problem with this film - too many meanwhiles, Sam Rockwell as a conniving competing weapons manufacturer plots to take down Stark and sees an ally in Whiplash.

Scarlett Johansson joins the cast as Stark's new assistant who is revealed to be a double agent working with Nick Fury (Samuel L. Jackson), introduced in the post credits of the original, of S.H.E.I.L.D. which was co-founded by Stark's father (Mad Men's John Slattery) who appears in an old Stark Expo film that just happens to contain a secret message. Whew!

There's a bunch of other elements I'm not going to go into because, well, you get the picture - it's over stuffed with plot strands. This means a number of payoffs, such as Rourke's placing in the climax, are a bit compromised.

By the way, Rourke's mock Ruskie accent made me keep thinking he was going to say "I'm going to break you" like Dolph Lundren did in ROCKY IV. Johansson doesn't make much of an impression except in one scene where she kicks the ass of a squad of baddies that comes off like an audition for CHARLIE'S ANGELS 3D.

As for the others - Paltrow just hovers around, Cheadle is a bit more engaged yet ultimately just along for the ride, and Rockwell does a decent job but doesn't bring much new to the game.

Director Favreau reprises his part as Stark's bodyguard giving himself more screen time which doesn't detract, but maybe should have been deleted scenes for the later DVD/Blu ray.

As we all know though, it's Downey Jr.'s stage and he makes the most of it. Glib wisecracks aside he has a great interrogation room scene with Rourke. Both actors bring it dramatically for one of the only breaks from the comic action spectacle, and it helps give the movie some needed grounding.

So the fresh feeling of the first one is gone and the plotting is a bit creaky as well and the exposition heavy, but there's enough fun to go around until the next time (stay through the credits to get a glimpse of what's coming). IRON MAN 2 is much better than just passable (as super hero sequels often are), and its heart (or arc reactor) is in the right place.

Good debut from Iron Man. I'm looking forward to this. I'd put the franchise in that select group just underneath Nolan's Batman films.

That was great movie. MARVELous CG. Can't wait for the next sequel. b^_^d

Good Action, Thriller film. I have seen this character Iron Man in My childhood days. Iron Man is one of my favorite movie.

Thank you for the post. I think this page is very nice to read and have added in my bookmark list.

It's always fun to see sites like this...It contributes the makers ideas and knowledge.

wonderful to find out this blog. Actually I’m an academic writer and usually search for different topics to get the idea which really helps me in writing. Well thank you very much for this write up!