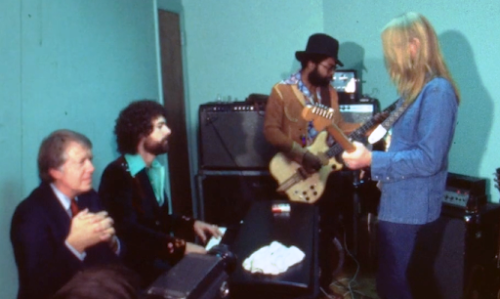 This documentary, which explores how Jimmy Carter’s love of music affected his life, campaign, and his term in office as the 39th President of the United States, is a sheer delight. It’s a jubilous experience to hear Carter discuss rock, soul, jazz, country, funk, blues, and classical music, and to see him jam to his favorites including The Allman Brothers, Willie Nelson, Johnny Cash, Paul Simon, Dizzy Gillespie, Shirley Caesar, and many others – a veritable who’s who of ‘70s popular music.

The film begins with a clip of Carter quoting Bob Dylan – “He not busy being born is busy dying” – as he often did on the campaign trail, and Dylan’s influence is a dominant theme throughout the doc with Carter saying that his music helped him get closer to his sons, and that he was one of his best friends. Dylan, who appears in newly shot interview segments, is highly complementary of Carter as well saying that “There’s many sides to him - he’s a nuclear engineer, wood-working carpenter,  he's also a poet, he’s a dirt farmer  if you told me he was a race car driver, I wouldn't be surprised.” 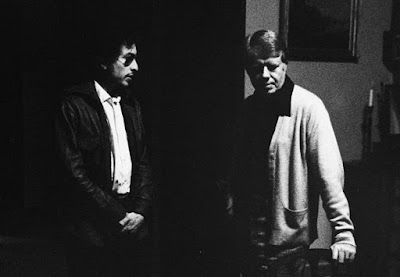 But it was Carter’s friendship with The Allman Brothers, particularly Greg Allman and Chuck Leavell, that had the biggest impact on Carter’s political career as they performed at fundraisers that helped him greatly when his campaign had run out of money. Their endorsement of Carter meant that many of their fans were swayed to vote for him as well. Other artists such as The Marshall Tucker Band, Charlie Daniels, and Jimmy Buffett followed suit.

“There’s some people who didn’t like my being deeply involved with Willie Nelson, and Bob Dylan, and disreputable rock and rollers, but I didn’t care about that because I was doing what I really believed, and the response I think from the followers of those musicians was much more influential than a few people who thought that being associated with rock and roll and radical people was inappropriate for a President.” - Jimmy Carter

Then there’s the neat device of having musicians such as Nile Rodgers, Roseanne Cash, Bono, Willie Nelson read aloud Carter’s poems such as “Plains,” “I Wanted to Share My Father’s World,” and “Itinerant Songsters Visit Our Village.”

The film’s last half hour is concerned with the politics of Carter’s one term - i.e. the Chinese peace negotiations, the horrible Iranian hostage crisis, mounting inflation, etc. – but it still keeps coming back to the music as Carter retreats to a room alone in the White House, where Truman had his office, to listen to Willie Nelson, and think about his problems and make prayers. 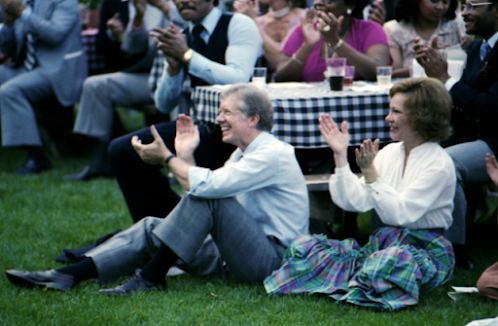 Although it only clocks in at just a little over an hour and a half, the pleasures of this portrait of a peanut farmer that came to be the first President to embrace rock and roll are infinite. I could go on and on about them, but I’ll just leave you with this – if you like Jimmy Carter going in, you’re going to like him 10 times more at the end.