New Trump Doc UNFIT: A Good Case For What We Already Know

Debuting today on digital/streaming, VOD platforms, and in select theaters: 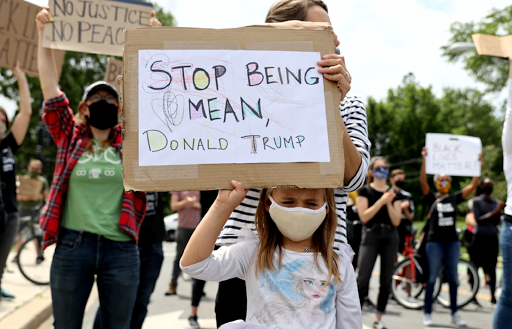 One of the most used statements about Donald J. Trump before and after his Presidency was that he is “unfit for office.” Dan Partland’s (American Race, Going Hollywood) first feature length documentary, UNFIT, examines exactly why with anecdotal commentary by various psychology experts, political analysts, historians, and former Trump cohorts, including the oily yet surprisingly insightful Anthony Scaramucci (The Mooch!).

As can be expected from the title, the film is presented as a thesis that darts around Trump’s history attempting to break down 45’s psyche through segments with such titles as “Malignant Narcissism,” “Gaslighting,” and “Is Democracy Dead?”

The first and one of the most prominent of the interviewees is George Conway, an attorney, and co-founder of the Lincoln Project, but is probably best known as the husband of Kellyanne Conway, Counselor to The President. Conway, most amusingly and accurately tells us that “Donald Trump is like a practical joke that got out of hand.”

Agreeing with Conway are such noted Psychologist, psychiatrists, and psychoanalysts as John Gartner Ph.D., Lance Dodes M.D., and Justin Frank M.D., but who disagree with “The Goldwater Rule,” which states that it is unethical for psychiatrists to give a professional opinion about public figures whom they have not examined in person.

Former White House Communications Director (for 11 days!) Scaramucci appears to give us his take (s) on Trump and, like I said above, has weighty insights aplenty about his former boss. The slick, quick talking entrepreneur certainly knows his history, and is right on the money, sadly, when he says that Trump “is a reflection of the cultural zeitgeist, and an avatar for that anger.”

One interesting difference of opinion on the topic of Trump’s bigotry occurs when The Mooch says “He’s an asshole, but that’s different from being a racist,” while Conway (again, Kellyanne’s husband) tearfully states, “This man is a racist, he is evil.”

Partland then goes further back in time with the help of Ruth Ben Ghiat, who speaks about Trump’s similarities to Mussolini, and Interwar Historian Cheryl Koos, who compares him to Hitler.

Now if those historical comparisons may seem overly familiar, as well as the bulk of the material about the film I’m babbling about, that’s because its themes and theories about Trump are obvious to the Nth degree. So much of the video footage has been aired and re-aired that any insight, whether comedic or psychological, has already been drenched dry.

Nonetheless, UNFIT is a weighty watch and has many smart moments. My favorite of the interview subjects is former Intelligence Officer Malcolm Nance, who once called presidential advisor Stephen Miller “Baby Goebbels” on one of his many appearances on Real Time with Bill Maher. Nance terrifyingly talks about people who are willing to bet their lives on Trump being a bluffer, a strategic thinker, who won’t start a nuclear war, while acknowledging that he’s a pathological liar. “You don’t know what the stakes are,” Nance chillingly concludes.

UNFIT could use more of that urgency, and less of all the obvious overused clips, but it does what it sets out to do. It makes a thorough, well-illustrated case. If only it its diagnosis wasn’t something we already knew everything about going in.