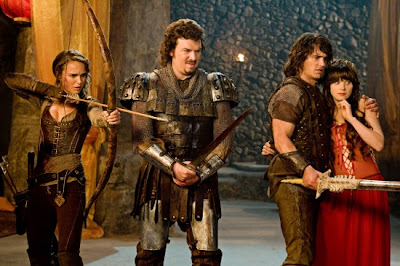 Sometimes really funny people make really unfunny films.
The comic pedigree of the folks involved in this medieval mess is strong – director David Gordon Green, actor/co-writer Danny McBride, and actor James Franco were all key players in one of my favorite comedies of the last 5 years: PINEAPPLE EXPRESS, but this comes nowhere near the laughter level of that manic marijuana-tinged movie.
It sure tries to, with scores of drug, sex, and bloody slaughter gags, yet none of them elicited even as much as a slight giggle out of me.
Here’s the plot anyway: McBride is an oafish prince who reluctantly joins his heroic brother (Franco) on a quest to rescue Franco’s fiancée (a dim witted Zooey Deschanel) from the clutches of an evil wizard (Justin Theroux).
Along the way they encounter Natalie Portman as a warrior princess, and they travel together taking on a five headed serpent monster, treacherous knights working for Theroux, and every profane expression known to be ever spoken by man.
On the surface YOUR HIGHNESS has everything necessary for a fantasy action comedy set during the Dark Ages – it’s got tons of sword play, silly sorcery by way of not-bad CGI, a horse-drawn chariot chase, severed limbs, gratuitous forest nymph nudity, and gorgeous locations in Northern Ireland.
Everything that is, except for legitimate laughs.
Reportedly much of the film was improvised, which makes sense because the dialogue is awful without any lines worth quoting.
McBride is simply doing his predictable slimeball schtick that he does on the HBO series East Bound And Down, and it wears thin really fast in this set-up.
All of McBride’s characteristics come off as clunky as the armor he wears.
Franco and Portman are both slumming it after their loftier turns in 127 HOURS and BLACK SWAN respectively, and it’s obvious they did this because they thought it would be fun, and I’m not doubting they had fun on set, but on screen they sadly look like they are wasting a lot of energy on extremely moronic material.
Deschanel seems detached from it all, maybe a result of certain substances that no doubt were passed around by the cast and crew.
As for the rest of the supporting players like Rasmus Hardiker, Toby Jones, and Charles Dance, I’ll let them off the hook – it’s bad enough for them to be in this film.
YOUR HIGHNESS is a crude cringe-inducing crap-fest devoid of wit and invention. I doubt even teenage stoners will laugh at it. I’m seriously surprised McBride, Franco, and Green think it would be funny, because they are capable of so much more comically.
“This quest sucks!” McBride complains at one point. I heartily agree.
More later...
Copyright 2004-2018 Daniel Cook Johnson at 11:16 AM