Sylvester Stallone & His All Star Band! 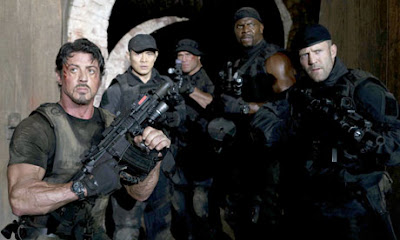 This is the definition of a critic proof movie – as its rating on the Rotten Tomatometer rapidly falls (in a week it fell from 58% to 39%) its box office rises - its been #1 since it opened with a gross nearing $70 million so far.

Apparently America wants a big badass blockbuster with a crew of well known action stars. Call it “Monsters of Mediocrity” if you will, but triple threat (actor/writer/director) Sylvester Stallone has assembled a solid B-Team of action movie mavericks including Jason Statham, Jet Li, Terry Crews, Randy Couture, and Dolph Lundgren.

You’d be forgiven for thinking that from the trailer that Bruce Willis and Arnold Schwarzenegger are on the mission too, but they only appear in one scene that tries, but fails to make much of a punch.

That could be said of the whole movie with its generic let’s-overthrow-a-corrupt-Latin American-dictator premise, but there is some fun to be had with this ‘80s throwback even if it oddly has too much downtime.

Mickey Rourke has a longer appearance than Willis and Schwarzenegger, but it’s still another glorified cameo as he never leaves his tattoo parlor. Rourke has one of the only serious dramatic moments telling a story about a woman that he failed to save from suicide that brings tears to his eyes. In a movie like this I really didn’t expect to see Rourke cry.

It’s mainly Stallone and Stratham’s show as they spend the largest amount of screen time getting each others backs in fights and shoot outs. The ending is a giant shit-storm of machine gun fire and explosions on top of explosions as expected. It’s played out in a lot of darkness and hyper cutting that makes it hard to follow, but if you like a lot of fiery explosions it should make your day.

Oh, there’s also Giselle Itié as the underwritten damsel in distress (What - An underwritten woman role in a Stallone action flick?) fighting for her poverty stricken people, her angry General father played by David Zayas (Angel Batista on Dexter), and Eric Roberts as an evil ex-CIA man agent backing the dictatorship.

THE EXPENDABLES is undercooked and overblown at the same time, but its core audience doesn’t appear to care. I shouldn’t either because this kind of mindlessness really shouldn’t be minded.

A couple of scenes were alright, but overall it looked like maybe they spent all their money on actors and explosives. In some scenes it looked like they added a lot of the blood splattering in post-production using CGI. Kinda disappointed, but I guess I'll have to watch the sequel when it comes out. Stallone has recently tweeted that Bruce Willis may return as a super villain. I'd have to see that.