The Best Of BLADE RUNNER On The Internets

When I saw in the Independent Weekly last week that BLADE RUNNER: THE FINAL CUT was going to be playing at the Carolina Theatre in Durham I was excited for several reasons:

1. The thrill of seeing this now inarguable classic film on the big screen for the first time in 26 years.

2. The legendary film, adapted from Phillip K. Dick’s short story "Do Androids Dream Of Electric Sheep", had frustratingly been at “very long wait” in my damn Netflix queue since this new cut was released on DVD last month.

And the most important reason:

4. It's is my Father’s all time favorite movie.

So I called my Dad immediately when I saw the ad in the paper that it was playing and said “let’s go.”

We weren’t alone in our plans – at the Sunday matinee we attended today the theatre was pretty packed with a diverse looking crowd. When it hit the screen my eyes looked like the opening shot above.

When it was over a lot of people clapped. I just simply said to my Dad “that was awesome.” Showing my age here I have to say that I saw the film back in ’82 at a crummy theatre that doesn’t exist anymore (The Ram Theatre in downtown Chapel Hill), and I didn’t care for it. Harrison Ford seemed drab and uninterested in the material and though I liked the vision of future L.A. the special effects were bad at times- the wires being plainly visible on what were supposed to be flying cars*.

I was 12 so my critical facilities weren’t really developed (not that they still don’t have a long way to go now) but over time with cable re-airings, various alternate versions including the heralded 1992 Director’s cut, and my father’s love of the film I have come to absolutely adore BLADE RUNNER. *

So follow the links and enjoy The Best Of BLADE RUNNER On The Internets:

The IMDb FAQ - It’s an obvious place to start but the best film site on the web has a lengthy incredibly informative entry that breaks down the many available versions and has interesting insights into the existential matters of the most artsy sci-fi flick this side of 2001: A SPACE ODYSSEY.

Brmovie.com – The Home Of Blade Runner - Much better than Warner Bros. official site for the film and also armed with a great FAQ this site, created as a forum for users of the newsgroup alt.fan.blade-runner, is regularly updated and brimming with sharply presented BR related info.

What's New in Blade Runner: The Final Cut? - A well written piece by John Howell for SFFMedia.com (Science Fiction And Fantasy Media) detailing the many changes in the new cut. The comments at the bottom of the article are a good read as well.

Q&A: Ridley Scott Has Finally Created the Blade Runner He Always Imagined - From Wired.com - a 5 page interview with director Ridley Scott that is pretty essential to every fan, casual or not, of BR. He talks at length about the ending, the battles with the studio, and the long relationship he’s had with the film that will not go away. Key quote: “I knew I’d done a pretty interesting movie, but it was so unusual that the majority of people were taken aback. They simply didn’t get it. Or, I think, better to say that they were enormously distracted by the environment.”

The BLADE RUNNER Nexus - This is a nice cleverly conceived graph also from Wired Magazine's website by Matthew Honan that charts the influences and styles: “BBR - Before Blade Runner” and “ABR - After Blade Runner.” Be sure to fully click & drag to take in each department on the left - there's a lot of great trivia tidbits. 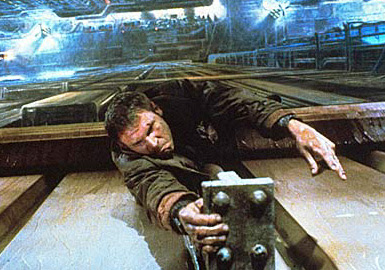 A great study of the evolution of an opinion - read Roger Ebert’s original review of BLADE RUNNER (printed July 2nd, 1982) in which, despite giving it 3 stars, calls it a “failure as a story” and concludes: “The obligatory love affair is pro forma, the villains are standard issue, and the climax is yet one more of those cliffhangers, with Ford dangling over an abyss by his fingertips.”

Then check out his recent review of BR: THE FINAL CUT and witness Ebert confessing he “committed a journalistic misdemeanor” and that “now it is time to cave in and admit it to the canon.” It is now included in his Great Movies Collection.

Blade Runner, Revisited. - By Stephen Metcalf - There has to be those who haven’t been won over so to represent such a clueless clan there's this Slate.com essay subtitled “How Will Fans Defend It Now?” It makes the argument that: “a quasi-sacred halo has come to surround it, a force field so powerful as to apparently render nuanced critical judgment impossible. For after all these years, and all these iterations, this is still in many respects the film panned by Maslin and Kael.” What should be panned is you, pal. Okay! That’s enough of a Blade Running writing round-up.

If the FINAL CUT is playing at a theatre near you make the effort to see it. I’m going to leave now and try not to step on the little tin-foil unicorn on the floor on my way out the door.

Maybe not the "best of Blade Runner" material, but here's my article about Olmos, Cityspeak, and Philip K. Dick, connected in a way I've seen no one talk about elsewhere:

...please where can I buy a unicorn?

Loved your blog. The more I think about it, the more I become convinced that the dark, dystopian view of life portrayed in Blade Runner, is not only our future, it is here now.

In the US, it was reported on SKY this week, they have just invented a robot girlfriend.

Anonymous said...
This comment has been removed by a blog administrator.
9:40 AM

Blade Runner: The Final Cut never played in a theater close to where I lived. It was only a small disappointment.

It didn't matter because I have the 5 disc set. I bought it the day it came out on DVD since it was very limited.

The Final Cut is not all that different from the director's cut. It was mostly cleaned up with an addition of a shot here, a removal of frames there, and some tweaks and adjustments to the overall film.

Great article. I just released a Blade Runner remix album.
http://neogothamprojects.bandcamp.com/album/neo-l-a-2019
I would be most appreciative if you could take a listen and do a little review. It's free to download and share.

Check this short film made by Stargate Studio (Heroes, Pan Am, 24) in the universe of Blade Runner. It's pretty amazing : http://oblikon.net/news/un-court-metrage-dans-lunivers-de-blade-runner/