Westerns, Lovers In Paris And Media Circuses Are Doing Fine Thank You

Got some recent moviegoing to babble 'bout so let's get at it : 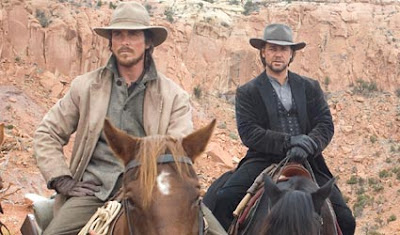 3:10 TO YUMA (Dir. James Mangold, 2007) I don’t want to spend much of this review addressing the state of the modern Western – I’ll just say that it’s a genre that will never die (see Deadwood and the upcoming THE ASSASSINATION OF JESSE JAMES). Those prematurely eulogizing it are discounting the allure of that period of history - tales with a backdrop of a lawless land that stretches to infinity will always be told. The tale told in James Mangold’s (WALK THE LINE) 3:10 TO YUMA is told very well – especially for a remake. I haven’t seen the original so I can’t compare but reasonably I am very skeptical about remakes so I was pleasantly surprised at how strong a movie this was. Christian Bale plays a down on his luck rancher who takes on the daunting task of transporting a villainous fast drawing outlaw (Russell Crowe) across country. The film’s title is their destination – a scheduled train with a prison car that will supposedly take Crowe to be tried and hung.

Obstacles aplenty surround Bale and his posse (including a wonderfully grizzled Peter Fonda) – Crowe’s murderous gang close behind set on freeing him, dangerous Indian territory, and the conniving overly confident Crowe himself. As Ben Wade –you’ll know him from the trail of the dead – Crowe does a career best performance. He perfects the kind of evil man who laughs through bloody teeth when being punched in the face, quotes ominous Bible passages, and never flickers for an instant in any hostile predicament. As an actor though he’s surely met his match with Christian Bale. Adding another sharp intense performance to an incredibly impressive roster, Bale really shines and should be rewarded come Oscar time. Far more than a genre exercise or a modernized re-imagining – 3:10 TO YUMA is one of the best films of the year. So forget about all the “death of the Western” diatribes and just savor the scenery. 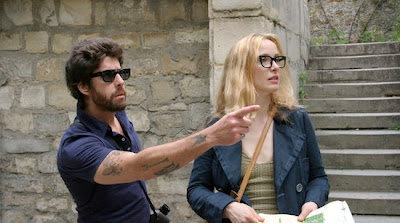 2 DAYS IN PARIS (Dir. Julie Delphy, 2007) Looks at a distance like another BEFORE SUNRISE/SUNSET love story travelogue but a closer look reveals that Delphy's directorial debut is fairly removed from those chatfests. Of course there is considerable Richard Linklater influence in the dialogue and use of tracking shots but there is an offbeat dynamic that is all Delphy. The premise is simple - a couple (Delphy, Adam Goldberg) spend a few days in the city of love during what appears to be a rough patch in their 2 year old relationship. She's a photographer; he's an interior decorator though during this trip he's the one taking pictures - a lot of pictures. They seem to run into a former lover of Delphy's at every turn which makes the already extremely neurotic Goldberg's heavily tatooed skin crawl. Goldberg's Woody Allenesque asides provide the humor throughout especially in one of the best scenes - a dinner with Delphy's real-life parents (Albert Delphy & Marie Pillet). Some funny affecting moments but maybe would've worked better as a short film - even at 96 minutes it feels a bit drawn out. Better yet - condense the best moments from 2 DAYS IN PARIS into a montage and it would've made a kick ass segment of PARIS JE T'AIME! Nah, I'm just blogging out of my ass - Delphy's film may be only fair but as a first time effort it's on the good end of fair. 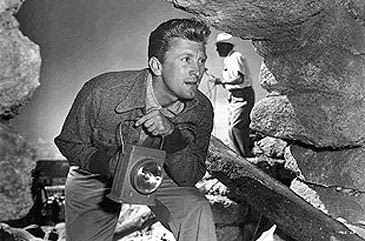 ACE IN THE HOLE * (Dir. Billy Wilder, 1951) It's amazing that Wilder's follow-up to the inarguable classic SUNSET BLVD. has been missing in action (never available on home video until now) and undocumented for so many years. I've picked up movie guides from the last decade that didn't have a listing for it (not even in Wilder's filmography!) and when I've mentioned it to my other film buff friends it got no recognition. Well, this spiffy new Criterion collection edition should change all that. Kirk Douglas stars as a wild-eyed hard drinking newspaper man who arrives in Albuquerque, New Mexico to revive his troubled career. Stopping at a trading post on the way to a rattlesnake hunt he hears of a man (Paul Benedict) trapped in a mine because of a cave collapse. He milks the story for all its worth even delaying the man's rescue and it becomes the definition - possibly where the phrase came from - of a media circus. With Douglas at his most intensely vicious and Wilder's gloriously cynical but insightful script - it's so nice that this film comes back to bite us on the ass and show us how little has changed. After watching it I turned off the DVD player to see pundit after pundit espouse about the latest O.J. caper on cable. Hard to look at that pointless blather the same way again after seeing ACE IN THE HOLE. You can't get a higher film babble recommendation than this.

* After its original poorly received release the film was re-titled THE BIG CARNIVAL and re-released. Apparently this didn't help - the film was still deemed too dark and it failed to gain an audience. Until now...