And Now, The Top 10 Celebrity Diets Throughout History

The Top 10 Celebrity Diets Throughout History 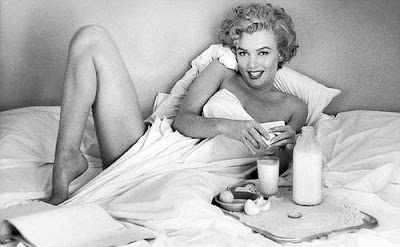 10. Beyonce: The "Queen Bee" herself has recently taken to social media to proclaim herself (and her husband Jay-Z) a newly-born vegetarian, but that's hardly been the only diet she has gone on throughout the years. To prepare for her starring role in the 2006 hit film DREAMGIRLS, Beyonce famously went on a "Master Cleanse" diet, drinking an all-liquid diet of water flavored with cayenne pepper, with a cheat day of pizza and wine thrown in occasionally as well.

9. Marilyn Monroe: The curvaceous blonde bombshell that dazzled the media throughout the 1950s absolutely hated lunches. So much so, in fact, that she skipped it entirely. Her diet regularly consisted of two raw eggs in warm milk for breakfast, followed by a dinner of broiled liver, steak, or lamb plus five carrots. Monroe loved her desserts, however, usually polishing off a scrumptious hot-fudge sundae to finish her night.

8. Elizabeth Taylor: Famously called, "the most beautiful woman in the world," Liz Taylor certainly had a unique approach to diet. She regularly dined on things like cottage cheese with sour cream over fruit, or a peanut-butter smothered steak sandwich, to name a few. She even reportedly had what she called "controlled pig-outs," where she once consumed an entire pizza and hot-fudge sundae by herself.

7. Sarah Michelle Gellar: Talk about self-control! To keep her physique, Sarah Michelle Gellar went on an extreme diet that restricted most foods except cabbage soup. Sound bland? Not to worry, she made sure to spice it up with vegetables, fruit, milk, and yogurt, and even added lean meats and brown rice towards the end of the week. Yum?

6. Kate Middleton: To get ready for the royal wedding, Kate Middleton employed the Dukan Diet, a plan modeled by the French that incorporates straight protein and vegetables at the beginning, and then slowly gets less strict in the following weeks. Fortunately, the Dukan Diet allows you to customize your diet based on how many pounds you would like to shed.

5. Lady Gaga: If fad diets don't work, you can always return to your roots. I mean, way back to your roots, like pureed peas and carrots. Lady Gaga allegedly eats baby food for her first two meals of the day, followed by a health-conscious dinner. Originally developed by Tracy Anderson, other adherents include Reese Witherspoon, Jennifer Aniston, and Gwyneth Paltrow.

4. Madonna: You might not be able to afford it, but for the "Material Girl" herself, eating a strenuous macrobiotic diet may just be the key to the fountain of youth. Good luck trying to afford it, much less hold to it, as the macrobiotic diet consists of eliminating all wheat, eggs, meats, and dairy completely, and only consuming "sea vegetables." I can only assume those don't come cheap.

3. Gwyneth Paltrow: After struggling with food allergies earlier in life, Gwyneth Paltrow has decided to eliminate everything "bad" such as bread, red meat, cow's milk, eggplants, and even tomatoes from her diet. To compensate, she starts every day with a green juice and eats a gluten-free, somewhat vegan diet.

2. Megan Fox: After exploding onto the scene in 2007's Transformers, Megan Fox has remained in the spotlight ever since, in part due to her athletic physique and chiseled body. She credits drinking copious amounts of apple cider vinegar for keeping her fit, but also leans heavily on The Five-Factor Diet, pioneered by Harley Pasternak. In case you haven't heard of it, the diet consists of making five-ingredient meals in less than five minutes. Perfect for the health-conscious, time-sensitive movie star.

1. Victoria Beckham: Leave it to Posh Spice to leave dieting up to science. Beckham is a fierce proponent of the alkaline diet, which aims to keep the body at an ideal pH level: somewhere between 7.35 and 7.45. Beckham claims it's not that difficult, and that by following a simple 80/20 rule of more vegetables and less grains and proteins. Although, if you really want to go full-on alkaline, it's best to get a urine test to check your optimal pH balance first. Hey, it seems to be working for her.

Of course to avoid the fad diets, a lot of people are turning to pre prepared meals. Services like Blue Apron are becoming more popular, as well as their diet variants like Nutrisystem for men which Pure Healthy Living breaks down here.