‘Tis The Season For Some Streaming: WONDER WOMAN 1984 & SOUL 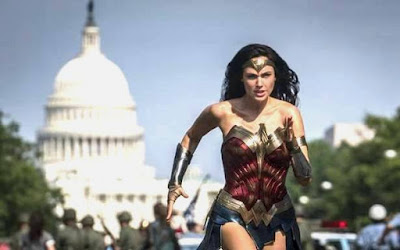 Yesterday, it seemed that just about everybody on my social media feeds was watching WONDER WOMAN 1984, which premiered on HBO Max; and SOUL, which premiered on Disney Plus. Both were originally slated to be theatrically releases, but, well, you know why they’re getting rolled out this way. However, WONDER WOMAN is getting a limited theatrical release including at some IMAX venues, while SOUL is being released on some big screens overseas.
Christmas afternoon, I viewed WW84, as the film declares itself (guess it’s better than WWII), Patty Jenkins’ sequel to her ultra successful 2017 WW, which is maybe the best of the recent spate of DC movies. Gal Godot returns as Diana/WW, who now works as a Smithsonian Institute anthropologist in Washington D.C. and lives at the Watergate complex.

It’s the mid ‘80s, as if you couldn’t tell from the title, and our heroine appears to be sad, and friendless. That’s where Kristen Wiig, an odd choice for a superhero movie, comes in as an awkward co-worker named Barbara Ann Minerva, who is inspecting some ancient stone, which is referred to as a “dream rock.”

This stone is obviously the movie’s McGuffin, as it grants wishes and everyone is after it including, of course, the villain, oil tycoon Maxwell Lord (Pedro Pascal), who you can’t look at and not think of Donald Trump. The guy has a similar bogus billionaire background and even says “I’m not a conman; I’m a television personality!” 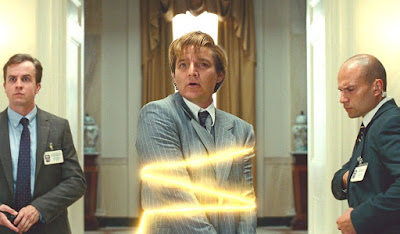 Jenkins may say that the character is an amalgam that’s as inspired by Bernie Madoff as it is Trump, but c’mon! That’s about as convincing as Orson Welles saying that CITIZEN KANE was only partly based on William Randolph Hearst.

Trump, I mean Lord, steals the stone and wishes to become one with it so he can grant everybody their wishes, and predictably they all have Monkey’s Paw-style consequences.

Oh, I haven’t even mentioned the return of Chris Pine as Diana’s dead boyfriend, Steve Trevor, now resurrected by a wish. Not sure if Pine is really necessary as their romance feels a bit flat.

WW84 is a very mixed bag, the first half is mildly enjoyable, though I could’ve done with more ‘80s kitsch and tackiness, but it gets crazy convoluted with big bloated action scenes including a desert highway chase sequence with army trucks and heavy artillery that fails to be very exciting until the last minute of it. Wiig’s Minerva, whose arc reminded me of Michelle Pfeifer’s in BATMAN RETURNS, is another element that doesn’t quite gel as Jenkins and crew don’t seem to know what to do with her. Her entire role is as awkward as her character.

There’s only intermittent dumb fun in WW84, and those instances aren’t helped by the two and a half hour running time. Despite not having very interesting dialogue (a speech at the end tries to rectify this and almost succeeds), Gadot does her best as she flies, glides, and lassos her way through the messy set-pieces. She really deserves a sleeker, more polished narrative. It’s also disappointing that they felt the Trump guy is worth redemption. Because, man, he really isn’t.

I almost hesitated even blogging about this movie, because either most folks have already seen it or are going to anyway no matter what anybody says. Oh, and if you do - stay through the end credits. It’s worth it. 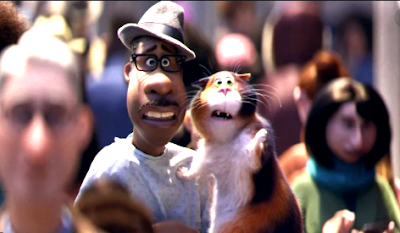 Much, much better is the Pixar film, SOUL, co-written and directed by Pete Docter, who’s worked on over two dozen Pixar productions. Jamie Foxx, who is the first African American protagonist in a Pixar movie (jeez it took over 20 of their movies for this to happen!) voices music teacher Joe Gardner, who on the verge of a big break playing piano in a band headed by acclaimed jazz saxophonist Dorothea Williams (Angela Bassett bringing the attitude) steps into an open manhole and finds that he’s become a glowing blue soul (sort of Casper-esque) in the afterlife set to be sent to “The Great Beyond.”

After Joe attempts to return to earth repeatedly, he meets a surly soul named 22 (voiced by a constantly quipping Tina Fey and they try to make the trip back together. But lo and behold a wacky mishap has Fey’s 22 entering Joe’s body, that’s in a coma in a hospital bed, while Joe takes over the body of a therapy cat resting at Joe’s feet on the bed. The mismatched duo frantically scramble from one farcical situation to another, but I’m not complaining as there are many hilarious moments. This is one of those films that makes me really miss the theater experience as I kept imagining an audience’s hysterical laughter in key places. Sigh.

The Pixar flick that this engaging romp most resembles is INSIDE/OUT, which Docter also directed, but it marches to its own beat aided by a delightful soundtrack by Trent Reznor, Atticus Ross, and Stephen Colbert’s bandleader Jon Batiste that should get some Oscar attention (that is, if they have the Oscars for this year).

I should also mention the rest of the well chosen supporting cast such as Phylicia Rashad as Joe’s mother, Questlove as a drummer in Bassett’s band, Phylicia Daveed Diggs as a rival of Joe’s, and Graham Norton as a spiritual hippy name Moonwind, who tries to help Joe and 22 solve their mixed-up shenanigans.
It will be no surprise for Pixar fans, that the animation is gorgeous, especially in the photo-realistic New York street scenes. Eye-candy city, for sure.

A cute, charming, and heartwarming story about literally chasing your dreams, SOUL is another winner for Pixar. The only issue I had with it is the title made me think it was about a soul artist, not a jazz musician. I get that the title JAZZ wouldn’t really work, and that the premise concerns souls, so I guess it’s that I’ve got to have something to criticize here. So if you’re considering cancelling your Disney Plus subscription because you’ve finished watching season two of The Mandalorian, before you do make sure you see SOUL.