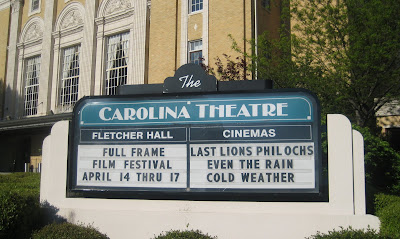 I came home last night late from Durham to a neighborhood without power due to the Tornado sweeping through the area Saturday afternoon. Probably wouldn't have done much blogging anyway as I was exhausted.

Well, now it's Sunday night and I've got a bunch of notes to unload so here's my round-up of documentaries from the last 2 days: 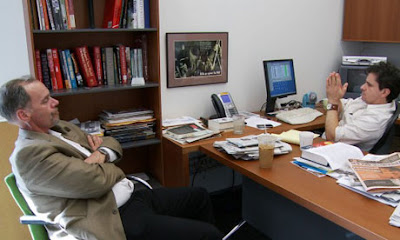 Reports of the death of the newspaper have been greatly exaggerated this film successfully stresses as we see the staff of the New York Times struggle to adapt in the face of major technological advances and threats like Wikileaks.

With amazing access to the media desk, Rossi follows these key players in print: Executive Editor Bill Keller, blogger turned Times writer Brain Stelter, Media Marketing Editor Bruce Headlam, and media and culture columnist David Carr who steals the movie over and over with his dead on acerbic comments.


As a subscriber to the Times, I loved the inside insights into the newspaper's ongoing developments, and thoroughly enjoyed how the film handled the history of the iconic newspaper with amusing anecdotes graced by great grainy archival footage.


The film was followed by a Q & A/discussion with director Rossi, producer Kate Novack, Headlam, and Stelter who all got a standing ovation. 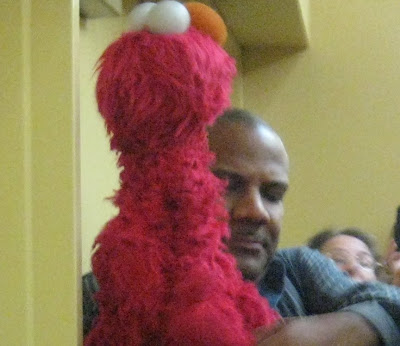 TUGS (Dir. Jessica Edwards, 2011) / BEING ELMO (Dir. Constance Marks, 2011) This program of 2 films started with a 10 minute movie about tugboats in the New York City harbor (even including a tugboat race!) that was wonderfully shot and certainly one of the best shorts I've seen #fullframe, but it was overwhelmingly overshadowed by the bio doc of Kevin Clash, the puppeteer and voice of the iconic Sesame Street character Elmo.


BEING ELMO is a joyous journey through the life of a man who grew up obsessed with puppets. As a kid he built 85 of them which he perfected operating and developing voices. In 1978 he traveled to New York to meet puppeteer/designer Kermit Love who had worked on many Jim Henson productions, and that opened the door for Clash to apply for Sesame Street.


Clash went on to work on LABYRINTH, Dinosaurs, TEENAGE MUTANT NINJA TURTLES, and many many Muppet productions, but his breakthrough, of course, came when puppeteer Richard Hunt frustratingly threw the Elmo puppet across the room to Clash and said: "See if you can come up with a voice for this thing."


The only fault I had with the film is that it didn't tell us about Love's death in 2008. I mean, I can understand why so much time is spent on Henson, but according to the film, Love was Clash's true mentor.


Anyway, the audience loved the movie, laughing at all the right places and aww-ing at every cute Muppet that popped up on screen, but they went nuts when a man holding what was obviously Elmo ran up and danced in front of the street during the credits.


That's right - Kevin Clash and Elmo were there!


This was great news for everyone in attendance except for TUGS director Jessica Edwards who stood alone on one side of the screen while everybody was wrapped up in Clash, and the BEING ELMO film makers (including director Constance Marks).


Edwards only got one question, and looked fairly unfazed, but the Full Frame folks really ought to have given the Elmo doc, which was nearly feature length at 76 minutes, its own slot and programmed TUGS with a different short film - one that doesn't involve an iconic character loved the world over. 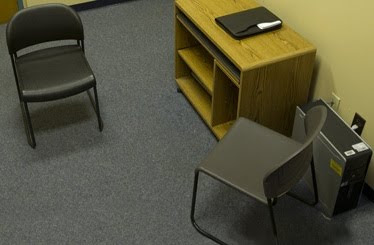 SCENES OF A CRIME (Dirs. Grover Babcock & Blue Hadaegh, 2011) This film, about a man accused of abusing his 4 month old baby, can be unpleasant to sit through, but its a stirring inquiry into wrongful interrogation techniques.


Using large portions of a ten hour video made by the detectives of their interrogation of the man (Adrian Thomas) who repeatedly declares his innocence, the film presents viewpoints from psychiatrists, jurors, and the cops themselves about the difficult situation.


There's also excerpts from a troubling police training video: "The Reid Technique," which hammers home the scenario in which a man might plead guilty to a crime he didn't commit. SCENES FROM A CRIME is a fascinating thought provoking film, and well deserving of the Center for Documentary Studies Filmmaker Award it won on Sunday. 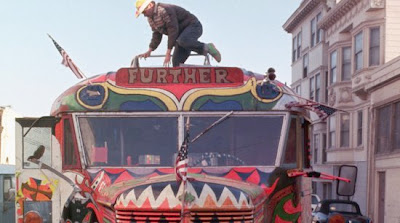 I've found the films of Alex Gibney (ENRON: THE SMARTEST GUYS IN THE ROOM, TAXI TO THE DARK SIDE, CASINO JACK AND THE UNITED STATES OF MONEY) to be fine, but a bit flashy and formulaic at times - sexying up material when it doesn't need to be sexied up. However, that style works wonders here as he takes rough old film of the infamous Merry Pranksters from their 1964 road trip across America, and shapes it into cohesive invigorating narrative.

It's a buzz to see color footage of counter culture God Ken Kesey (author of "One Flew Over The Cuckoo's Nest" if you don't know) dancing around, talking a mile-a-minute, with Neal Cassady (inspiration for the Character of Dean Moriarty in Jack Kerouac's "On The Road"), and an assorted gang of freaks with monikers such as "Zonker", "Hardly Visible", and "Stark Naked" living it up on the eve of the '60s revolution.


Injesting every substance they can find, they make the trip in a school bus painted and re-painted in psychedelia, and dubbed "Further."


MAGIC TRIP is a colorful, funny, and rockin' flick that captures its era beautifully and is sure to give audiences a cinematic contact high. 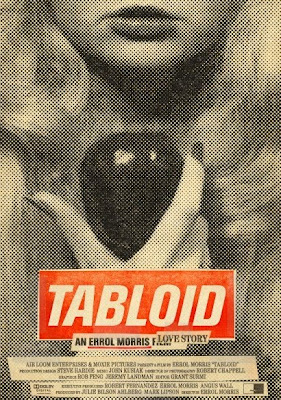 TABLOID (Dir. Errol Morris, 2011) This was definitely the craziest film of the fest, and coming after MAGIC TRIP - that's saying a lot. It comes from an unlikely source - famed documentarian Errol Morris (GATES OF HEAVEN, THE THIN BLUE LINE, THE FOG OF WAR, STANDARD OPERATING PROCEDURE) - and is about a silly subject, which was called the "Mormons sex in chains case."


Simply stated, the film is about Joyce McKinney, a former beauty queen (Ms. Wyoming World), who was charged of kidnapping a Mormon missionary she used to date, after trailing him to England in 1977.


Maybe it's not so simple. McKinney claims repeatedly that they were in love and that her beau had been brainwashed by the Mormon Church, but interviews with the Daily Press's Peter Tory and the Daily Mirror's Kevin Gavin tell a different story.


It's McKinney, herself, as an interview subject that makes this movie roll with her hilarious sing-songy Southern accent, and bubbly demeanor. Whether the film is showing us sordid headlines and photos of her in the 'Me' decade, or giving us the twisted tale of her getting involved with cloning her pit bull puppy (that's right), she's always got a funny line for the occasion.


At one point, McKinney says: "See if you can get the vision set in your head, Mr. Film Maker!" Morris sure nailed the vision here. 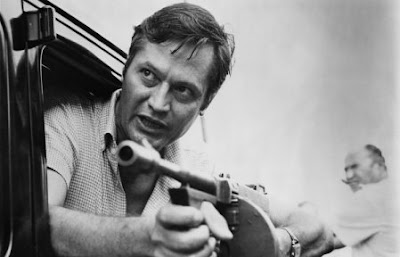 Many documentaries about the "New Hollywood" movement in the '60s and '70s have had small segments about the huge influence of director/producer Roger Corman, so it seems time for the man to be the star of his own career appraising bio doc.


An incredibly funny ride through drive-in movie schlock, and exploitation mayhem is at hand with a moving message about how much fun movies that don't take themselves seriously can be.


Before JAWS and STAR WARS came along and co-opted his model with bigger budgets, Corman's movies were the go-to choice for campy big screen entertainment, and there's a lot of it here with dozens of clips, film stills, and garrish movie posters.


It's those interview bits that really had me laughing like when Jack Nicholson said: "By mistake he actually made a good picture every once in a while...I was never in it, but that was as much my fault as it was the next guy's."


Nicholson tears up a bit towards the end of the doc when talking about Corman being his sole source of support for many years. With all this mighty evidence of a one-of-a-kind film maker who still goes against the system, I did too.


The next film was a rescreening that was announced after the Awards BBQ: 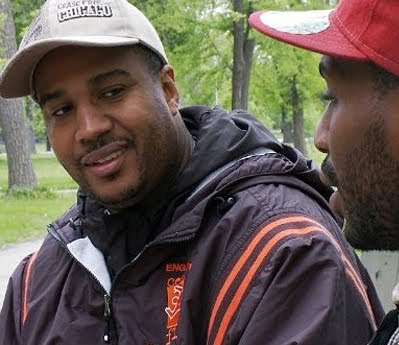 THE INTERRUPTERS (Dir. Steve James, 2011) As this was my final film of the fest I was a bit weary, but this doc still had my attention from start to finish. James (HOOP DREAMS) presents the passionate mission of the "Violence Interrupters" - members of the Chicago based organizion CeaseFire.


Employing an intervention strategy intended to halt the huge amount of gun violence affecting the community, the project appears to be making strides, although in many instances in this film, the efforts can feel profoundly futile.


It's a long film (144 minutes), but James makes good use of the time following well meaning members of CeaseFire like the fiercely determined Ameena Matthews, and Cobe Williams who used to be heavily involved in crime. We sit in on meetings, walk the streets, and enter the homes in Chicago danger zones, and it's all powerfully affecting.


Okay! So that's another Full Frame Documentary Film Festival done. There were a lot of films I didn't see so please seek other's coverage. That's what I'm going to do right now, because even after seeing 20 docs over the last 4 days I'm still hungry for more.

Hey - I am really delighted to discover this. great job!